Allegra Summer Play Party Proves to Be a Sizzling Affair!

Allegra Summer Play Party Proves to Be a Sizzling Affair!

When you put 25 of Toronto’s top escorts in a chic setting along with 25 Allegra Allies (members of our exclusive clients club), you can bet on things getting steamy! And that’s what happened when these 50 sexthusiasts got together for the Allegra Summer Play Party. It sizzled inside Toronto’s elegant Darling Mansion on July 19, 2018.

In the interests of science (and because we love true sexy stories), Allegra asked some of our Allies about their hot, hot time with 25 sexy escorts in the same place. Here’s what they told us.

“I always wanted to attend a play party, and wanted the chance to meet in person a number of ladies I was curious about,” said the guest known as “Big Bad Mack Daddy”. “Seeing and wanting to meet some of the girls on the site, I wanted to attend a party like this,” added “ED”.

For one Allegra Ally who wanted to stay anonymous, the Summer Play Party offered “the opportunity to be together with so many beautiful women for a night of debauchery.”

As for “Rico”? After considering the possibilities of playing with 25 gorgeous escorts, he decided to attend because “I’d never done it before, and I wanted to scratch it off my bucket list!”

The Allegra Allies have many, many tales of sexy times at the Allegra Summer Play Party.

For Big Bad Mack Daddy, his hottest Summer Play Party Experience was “Being inside Phoebe while Nadine entertained 2 gentlemen in her own special way!”

Then there’s “Rico”. Asked about his hottest moment at the Summer Play Party, he replied, “while I was doing Nadine de Valle furiously in Missionary, another dude offered himself for a BBBJ to Nadine after politely asking if he could join. Nadine seemed to be really getting into it, and I could feel her vag muscles tensing around my shaft. I found this so hot that I pulled out and came all over her tits. Soon the other guy followed suit and came all over her tits after me, and another dude Tony then came all over her tits. Afterwards Dina came by and promptly licked all the semen off Nadine. Now that was HOT!!! And everyone involved gave each other a air high five. ;) Props to both Nadine and Dina!”

Mad About the Girls

“The girls were really friendly, bright, approachable and very gorgeous,” said ED. “I’m normally shy and quiet, but they made me feel relaxed.”

“JayK” agreed, citing “The great hostess Nikki, and the ladies that were so nice and willing to make your fantasies come true.”

Our guests were also happy about the relaxed, accepting atmosphere at the Allegra Summer Play Party.

“Everyone was so welcome and open in all situations,” said Tony. “You could be a participant or you could be a voyeur and just watch. Almost every lady was okay with being approached, turning it into a group situation, such as making out or face fucking while she was being fucked or being eaten out herself.”

The elegant Darling Mansion was similarly well-reviewed. “The venue was awesome,” said “Powerten”. “It suited the variety and beauty of the ladies.”

“The House itself was fun,” echoed “Vandongen”. “Also nice to just socialize at bar and down stairs. Nice vibe. All MVPs in my book. Would make great bubble gum cards. Runs batted in to best yardage on 3rd and goal.”

As for the Allegra Summer Play Party itself? “It was very well organized, lots of snacks, drinks, and water to help you rehydrate and fuel up,” Rico said. “Lots of stimulating conversations from the girls, and the quality of the lingerie was just excellent. It helped me to get over my first time Play Party jitters. :)”

The Escorts Also Loved It!

Judging by their post-party Twitter feeds, our escorts had as great a time as the Allies at the Allegra Summer Play Party.

“Holy crap,” said Luxx (formerly Lucy) Sloane. “What an amazing night! I’m still reeling. Thank you to everyone I met and played with last night, and to the amazing members of @AllegraEscorts for throwing the best party EVER!

“Last night was incredible,” agreed Atley Smith. “It was a dream.”

“Allegra play party was one for the books,” wrote Berlin Moss. “Thanks to all the gents for coming out and a huge shoutout to @AllegraEscorts for all the hard work put into organizing a wonderful event for all.”

“What an amazing party!” said Danika Déjà Vu. “I’m so happy to be a part of @AllegraEscorts.”

Don’t Miss the Next Play Party!

To make sure you don’t miss out next time, sign up to our free Allegra Allies Program: http://allegraescortscollective.com/allegra-allies-program/. We’ll notify you by email when the next Allegra Play Party is coming up.

Note: Here’s the story about our first-ever Play Party — http://allegraescortscollective.com/2018/02/27/allies-escorts-ecstatic-allegras-first-play-party/ 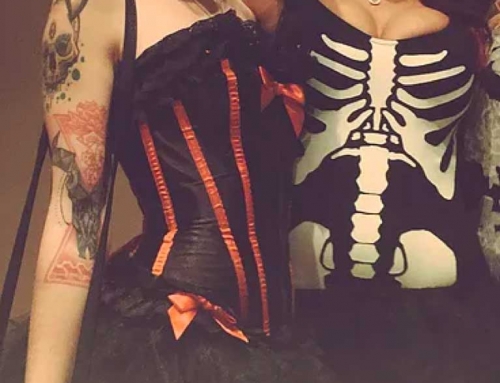 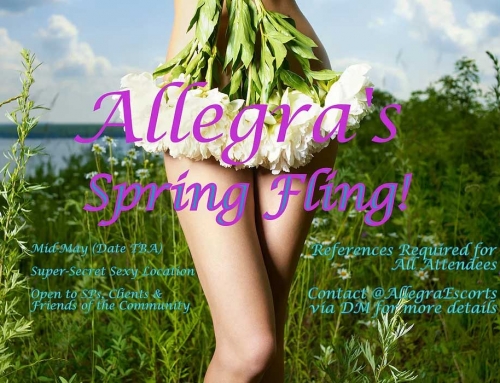